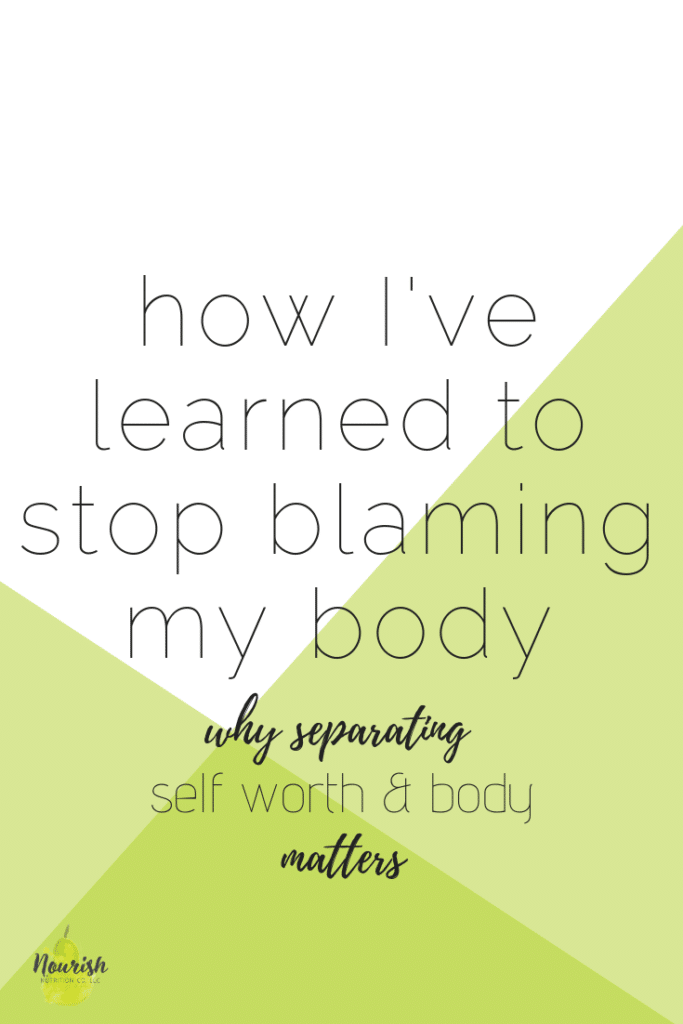 It's so easy to blame not being accepted on our bodies, but what did they ever do to us? Here's how I've learned to stop blaming my body, and how it's helped me.

***Disclaimer: let me be perfectly clear here, I am sharing my own delusion-ed teenager thoughts and experiences here. I would never downplay the severity of an eating disorder or disordered eating. I take those both very seriously, and would never mock them or the people who suffer every day or are in constant recovery post eating disorder. I lost one of my best childhood friends to bulemia, and that's something I will never take lightly. But with that said, because of what I interpreted diet culture and health to be in my teenage years, because weight stigma is a real thing, and serious in it's own way, I wanted to share a few thoughts from my childhood, and those include 'trying out' an eating disorder like it's normal or healthy. Neither of which was***

Were you like me? Did you blame your inability to be accepted, to be pursued by a boy, your loneliness on how your body looked? Do you still do that?

I grew up dancing, not just any dancing, but ballet dancing. I danced until my junior year in high school. I had good friends there, was able to move and dance, which I loved. I was never that good, and I was also in the heavier/taller group of girls at my studio. You know, compared to what you expect ballet dancers to look like-petite in every sense of the word. Even though I recognize my privilege having grown up in a household where I have no recollection of hearing my mom talk negatively about her weight, or about mine or my sister's weight, I was never told to lose weight at ballet or teased about what my body looked like; teenagers want nothing more than to fit in. Regardless of who you are. I just felt like my friends were all smart, athletic, pretty, and fun, which they all were, and I'd say all looked better or were skinnier than I was.. that's what I thought at least. On and off, I felt inadequate in each of these areas. Again, even though I was so privileged to never have close external forces tell me such things. It all came from within. I just wanted to be like them.

I wrote about it on Instagram, how I 'tried' to be anorexic. Somehow I thought that by not eating anything, I could lose those love handles, and be happy. It's funny to me, because, even in retrospect, I don't think I really believed that I would be able to maintain a diet of carrot sticks and the occasional yogurt, I tried to eat very little at meals. Somehow that pang of hunger felt empowering to me. I felt automatically skinnier, and twisted-ly happier. Until I couldn't stand it.... and binged on whatever was in arms reach (I could be coy, but binging follows dieting for so many people..end of story). I say I 'tried' to eat disordered, because I would do this for the occasional meal. At the end of the day, my biological hunger and love of food always won out. It wasn't anything I thought hard about, that's just the series of events. Again, it's silly looking back, and especially in my position right now, knowing about the dangers of disordered eating, and how severe eating disorders are. In no way do I try to minimize the severity of eating disorders or tendencies, but I just wanted to share what I was thinking in hindsight, and share just how normal and ok I thought it was. Even from someone who didn't feel much outside pressure to fit in.

Looking back, I try to pinpoint my rationale for doing such things. Although my eating habits were caused by many different factors, I think the desire to control this one thing felt so important because a. society tells us that our value and acceptance are based on our weight b. weight is 'easier' to control than other aspects of our life.

The truth was, and still sometimes is that deep seeded desire to be accepted. Although I had really great friends in middle and high school, a select few of which I still talk to to this day, I had major anxiety about fitting in and actually being liked by my friends and classmates. It was normal to me, but probably not normal in a general sense. It was sometimes easier to not reach out at a risk of no-one biting. I grew up believing that being strong and capable meant that I didn't share my vulnerabilities. I just held it in like a winner instead of asking my friends why they didn't show up to my Halloween party, ever. And just wallowing in my room about it. You see disappointment is, well disappointing, and people are occasionally disappointing. I myself am occasionally disappointing. I've come to better understand that that's life, but at the time, I thought it was because no-one liked me. Seriously. Since I couldn't control what others did to me, I looked inward, it must have been me. I wasn't fun, or pretty, or skinny enough. (in retrospect that looks ridiculous, but again-the common thoughts of a teenage mind). Ok, so I will skip lunch to get skinny to be liked.

And take those thoughts a step farther.... boys and dating. We're told early on that we have to be attractive to boys and men. That we have to take care of ourselves so they like us. That we have to look nice and put on make-up. I could go on, but the gist of this is that our bodies, our appearance is what others are attracted to. No mention of being yourself so you can find someone you're compatible with, or treating yourself well to show how you treat others. Nope, look nice. Since when did we let our complex personalities and unique wonderful traits be minimized to let our appearance shine? When our appearance, with the exception of basic hygiene and showing our individual style, tells others nothing about who we are as people.

I didn't date much as a teenager, well I don't date much as a twenty-something either, but at least now I understand that it's not because of how I look... and if it is, well those guys can go screw themselves... that would be far more productive.

But back then, I thought that if I could lose like 5 pounds, I'd be happy, and the boys would come clambering. Yes clambering. Chalk it up to wishful thinking, or the grass is greener syndrome, whatever it was, it had to be my weight.

Fast-forward 10-15 years, I'm pretty much the same weight I was as a teenager, no great guys have come clambering after me (for very long at least), but I'm a lot happier than I was then. I've learned to embrace my shortcomings and challenges in life, I've had experiences that taught me that I am worthy of having good friends and a boyfriend or two, that I am more than a number on the scale, or an exciting new diet. I am me, imperfect, flawed, human me. I can help people with my strengths, I can connect with others over my shortcomings, and I can live a happy and fulfilled, and purposeful life regardless of my weight. I am worthy of my own love, and the love of others just as I am.

I won't say that negative feelings don't creep into my thoughts occasionally, or often at times. That would be a complete lie. They do, and they kick me in the face. But after wallowing, and sometimes so much ice cream it leaves me with a stomach ache, I am overcome with remembering my worth. It's not tied up in how social I've been, or how many dates I've been on, it's not tied up in a restrictive diet or weight loss, it's tied up in me.

Same goes for you. Your worth, all of our worth comes from who we are, not what we are, or what we look like, but who we are. If anyone tries to make you feel otherwise, tell them to screw themselves and walk off....

oh no, scratch that. I bet that'd make them mad & want to call you all sorts of horrible things. Tell them that your worth comes from who you are and in your goodness, not your jeans size or BMI.

Welcome! I’m Rebecca, a food loving dietitian. On Nourish Nutrition, you’ll find real, quick, and nourishing recipes for one that'll get you to want to cook for yourself, because you deserve it.

At Nourish Nutrition, you'll find bold, flavorful recipes for one. Most are single serving, and all have suggestions to use up the leftover ingredients so you can stop throwing away unused ingredients & leftovers!