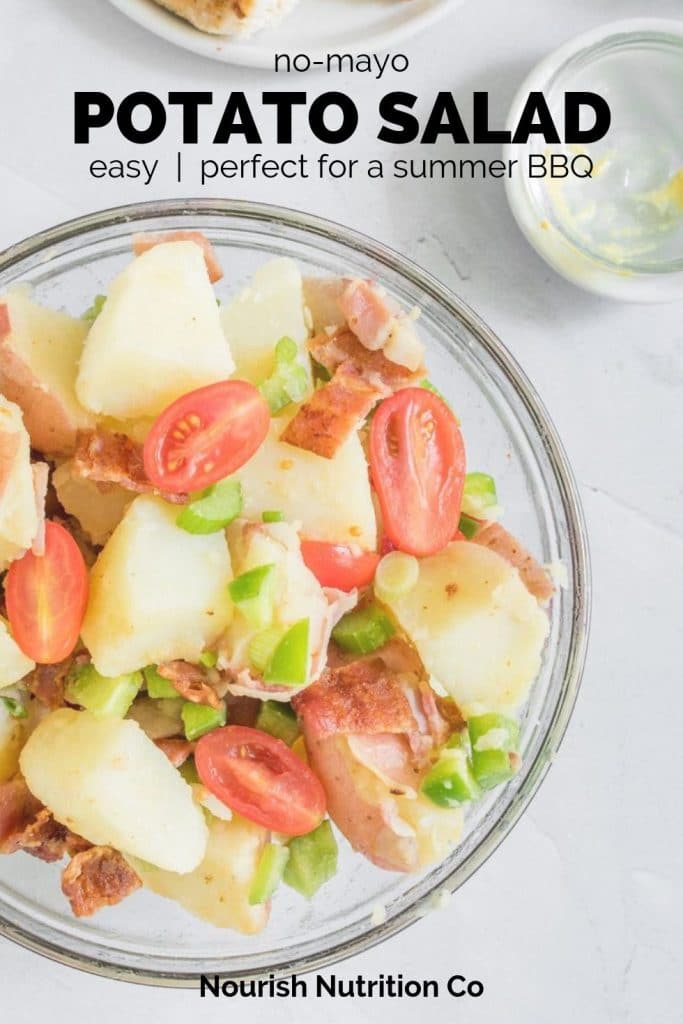 This light and tangy potato salad with bacon and vegetables is the perfect summer side. It's also a great dish to take to a summer BBQ. This eggless potato salad takes less than 30 minutes to make, and is great at a BBQ or with Grilled chicken added.

PIN HERE to add to your recipe box.

How this eggless potato salad is gonna make your life easier

Chopped vegetables, freshly fried bacon, and a simple dressing.... that can sit in the sun for a bit AND is just as good day 2? Can life get any better? I like to leave the potato wedges fairly large which means that you chop them up really quickly, and the remaining vegetables are easy & quick to chop. This is not like your traditional salad with lots of chopped ingredients.

Why I love this recipe

I love a good potato salad, but tend to get tired of the traditional mayo potato salad, so this vinaigrette dressed potato salad is so fresh and bursting with bold flavor, it's the perfect easy accompaniment to grilled meat.

How to make this no-mayo potato salad

I start with quartered red potatoes, chopped celery, green bell pepper, scallion, halved tomato, & bacon. I used these ingredients partly because that's what I had on hand, partly because they sounded good. At it's base you definitely need potatoes, bacon, some type of onion, and tomatoes. Everything else is just gravy.

Here's how I cooked the potatoes in my Instant Pot: Pour 1 cup water in Instant Pot bowl then place 1 lb of similarly sized red potatoes on steamer basket in Instant Pot bowl. Secure lid of instant pot and set vent to SEALING. Set to STEAM, and set timer to 10 minutes. Let pressure release naturally for about 5-7 minutes after timer goes off. Then open vent, remove lid, and take potatoes out of the Instant Pot. Cut into even sized cubes.

Cook bacon while potatoes are cooking.

Pour salad dressing over potato salad and toss until well incorporated. You can eat this salad immediately, but I'd recommend leaving it out at room temperature for at least 15 minutes to let the potatoes and other vegetables soak up some of the dressing. It's also great the next day!

Do I have to cook the potatoes in an Instant Pot?

Absolutely not. If you don't have an instant pot, I'd recommend boiling the potatoes similar to how you boil potatoes to make mashed potatoes. Here's how you can cook them over the stove.

Instead of thinking about it being less or more healthy, I like to make this salad if I'm in the mood for lighter flavors. The vinegar based dressing is bold, refreshing, and so good. Sometimes it's fun to make a potato salad that's not the traditional mayo based one. I also like this salad because it's safer to sit out for longer than a salad with mayo, so it's easier food-safety wise. At the end of the day, I recommend choosing a potato salad recipe based on how it pairs with the other foods you're cooking/eating and what sounds good vs the nutritional value of the ingredients.

What can I serve this potato salad with?

This potato salad would be delicious with easy chicken burgers, my new fave grilled lamb steak, and really any piece of meat.

What if I want to turn this into a full meal itself?

I've added grilled chicken to this salad. It's easy, cooks along with the bacon, and tastes great with the dressing, potatoes, and bacon. Rotisserie chicken would be great, guess I'm highly recommending adding chicken to it, but edamame would be easy and delicious too.

Ways to repurpose this potato salad

Did you make this eggless potato salad? leave me a comment to share how it turned out! 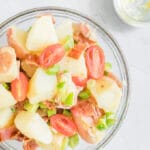 Want to get more single serving recipes delivered to your inbox? Click here to download my Single Serving Cookbook.

Welcome! I’m Rebecca, a food loving dietitian. On Nourish Nutrition, you’ll find real, quick, and nourishing recipes for one that'll get you to want to cook for yourself, because you deserve it.

At Nourish Nutrition, you'll find bold, flavorful recipes for one. Most are single serving, and all have suggestions to use up the leftover ingredients so you can stop throwing away unused ingredients & leftovers!